What would Brexit mean for scientific research in the UK and the EU?

The date of the referendum that decides whether the UK will leave or remain in the EU is creeping closer. Conflicting opinions and contradictory statistics are circulating the newspapers. The UK’s major politicians air their views: Boris Johnson, Mayor of London, describes the referendum as similar to escaping from jail, while David Cameron plays the uncertainty card, forecasting two years of undecided negotiations ahead.

But what is particularly of interest in our field, is how this vote could impact on scientific research, from both the perspective of the UK and the EU. Stephen Hawking’s revealed his influential opinion in March, that Brexit would be a “disaster” for scientific research. Fear has also been conveyed by 150 fellows at the Royal Society, the UK’s learned society, expressing that Britain’s departure would hamper the current “cutting-edge” scientific research. But in what ways and to what extent?

EU funding is a critical argument in this debate and has been used as a means of encouraging UK voters to stay, claiming that the research contributions have “benefitted the UK as a whole”. It has also been reported that, in the latest round of scientific funding, Horizon 2020, the UK has received 15.4% of the funds, second only to Germany. But what do these facts and figures actually mean? And how much do these countries receive compared to their contributions?

In the last round of research funding, FP7, the UK did indeed receive, in absolute figures, the second-highest amount of money, in comparison with the other EU members. However, what is not usually mentioned, is the total amount of funding acquired, when the EU structural funds, money that is dedicated to the least economically developed regions within the EU, are also accounted for. When the structural funds are also totaled, Poland and Italy overtake the UK, with Spain following very closely behind, and Germany still coming out on top by over €3 bn.

In terms of the input to output ratio, the UK does receive more money from the EU than in contributes for scientific research. From the period of 2007 to 2013, the UK contributed €5.4 bn and received €8.8 bn in return. However, when totaling the overall EU contributions, not just those related to research, the UK made a loss and put in €77.7bn and to get €47.5bn back. 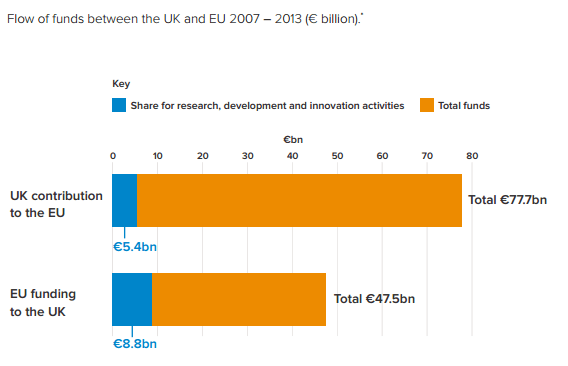 So how would funding affect the UK as a non-EU member?

As part of the funding issue, Switzerland is made an example of, as a country that had the option to profit from the EU but missed out, due to its unwillingness to conform to the EU policies, and the UK is predicted by some journalists to end up in the same sorry state. But what is the actual procedure concerned with EU research funding and non-EU members? Non-member countries, like Switzerland and Norway, have no power in negotiating the allocation of funds. They can, however, receive funding, if the EU members agree. This funding is much lower than what the EU members receive – Switzerland, the highest receiver, got 2% of the funds from 2007-2013, whereas the UK received over seven times this amount.

Aside from money worries, there is also a great concern that by exiting the EU, the UK will sever its partnerships with the EU and will be left isolated. Collaboration strengthens research enormously; in fact, a third of articles in high-quality journals, published in Britain, are a result of combined efforts. New Scientist claims that “Ousted from Europe, Britain would be out in the cold”. But how exactly would Brexit change Britain’s bonds with European research?

As part of the EU funding program, certain groups exist that aim to pool national research efforts. As well as combining knowledge, the European funding process also facilitates collaboration. All scientific funding is received in Europe at the same time, meaning there is no need for scientists to delay their work while other countries wait on their haunches to receive money. There are intergovernmental organizations, such as the European Organization for Nuclear Research (CERN) and the European Synchrotron Radiation Facility (ESRF). There are also several collaboration groups split into separate categories, depending on whether the organizations involved are public or private. The main category is Joint Programming Initiatives (JPIs) that links public organizations in Europe. Within this category, there are ten initiatives for scientific research, all of which the UK is involved in. Although it is not impossible for non-EU member countries to be incorporated in these initiatives, the timing of Britain’s funding could create difficulties with its overall collaboration with Europe and would make it more difficult to participate in these initiatives. The importance of the UK’s international connections is exemplified by the fact that its international papers have risen from 15% to 50% in the last 35 years. This, paired with the cold reactions that have been expressed towards the possibility of Brexit – notably, Hollande voicing clearly that there will be consequences of the UK’s departure – foretells negative prospects for UK science.

Freedom of movement is also highlighted as a major issue for matters concerning Brexit and science. At the moment, 15% of academic staff in UK universities are non-UK EU nationals. This statistic again demonstrates the importance EU connections for the UK in regard to science: many UK researchers themselves relocate to other EU countries. For example, 25% of UK researchers living in the EU move to Germany and 14% to Italy. These percentages also correlate closely to the amount of funding these respective countries receive. Therefore, the matter of freedom of movement is bound tightly to the financial advantages, as it seems researchers follow the funding. However, restricting freedom of movement could improve the diversity of scientists in the UK: by limiting the number of researchers originating from the rest of the EU, additional places would remain open to researchers from outside the EU, who are currently discriminated against. 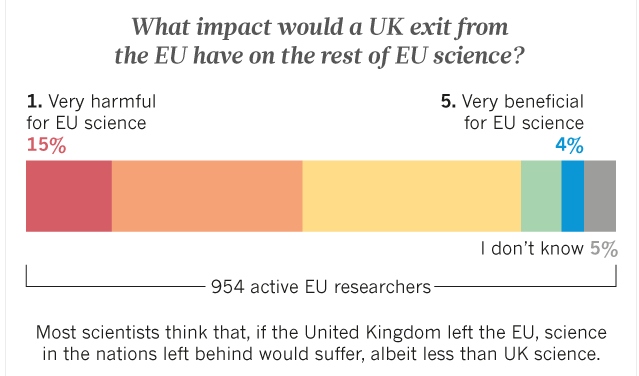 What is also relevant to this discussion, and what is rarely mentioned in the Brexit debate, is the impact the UK’s departure could have on Europe, with regards to research. Obviously, if the UK were to leave the EU, the changes would affect the UK the most, but that is not to say that there will be no impact on the rest of the EU. Lesley Wilson, secretary general of the European University Association in Brussels has stated that both “Europe would suffer and the UK would suffer”, a view which is also supported by the Nature poll taken by UK researchers last week. Alan Thorpe, a former director of the European Centre for Medium Range Weather Forecasting, claims that Europeans “are the envy of the world in what we can do collectively”, but the UK’s exit could harm this reputation. In terms of numbers, Europe has more researchers than the rest of the world, but this figure would be greatly reduced once UK researchers are subtracted.

Not only would the number of European researchers be lowered, but also their success. The UK’s importance in matters of European scientific research is demonstrated by statistics concerning scientific output. Currently, the UK ranks 3rd in the world rankings, behind the heavily populated USA and China. Closely following the UK, is Germany in 4th place. There is then a big jump of around 600k documents until we reach the next EU state, France, in 6th position. From then on, the rest of Europe is interspersed with countries from other continents. If the UK were to leave, it could greatly affect Europe’s overall prosperity in scientific research.

It is clear that Brexit could have large repercussions for the UK and Europe concerning scientific research. It is also apparent that funding plays a core role in the impact of research. However, money is not the sole factor. The UK’s collaboration in science with other EU members could be greatly limited and could affect Europe’s overall progress even more than funding. In contrast, certain Brexit campaigners argue the benefits of the UK cutting loose from EU scientific regulations, claiming it would lead to more progress in GM in crops and clinical research. Whether this newly found freedom will actually advance scientific research when the restrictions on collaboration and funding are considered is uncertain, however.  Nevertheless, despite what Die Welt, a German national newspaper, claims, Brexit would alter Germany, and create consequences in terms of Europe’s overall reputation and success in science.

Figures were taken from the Royal Society report ‘UK research and the European Union: The role of the EU in funding UK research’ under the creative license CC BY-NC-SA and Nature’s journal ‘Scientists say ‘no’ to UK exit from Europe in Nature poll’ with Nature Publishing Group’s permission.