In part one of  “labfolder, the digital lab notebook – Part 1” I described the feelings that were driving us towards developing a digital laboratory notebook, helping researchers to organize, archive and share knowledge generated in research laboratories. There were more reasons motivating us: All of us perceived the way knowledge is communicated in science not only as difficult within research groups, but also as very complicated within the whole scientific community. Therefore we established a further aim for our digital laboratory notebook: to simplify scientific communication and data sharing. 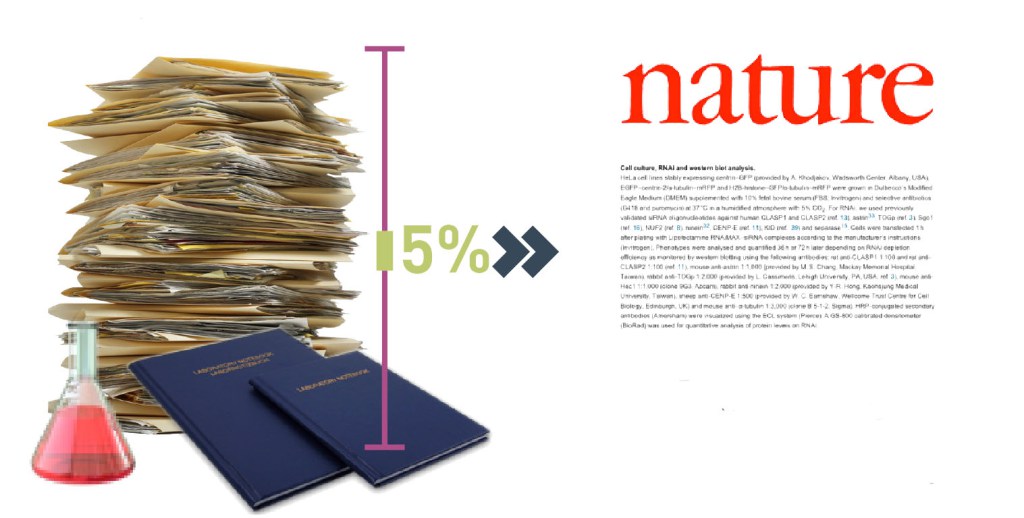 The paper dilemma without using a digital laboratory notebook: only 5% of all experimental data are ever published, mostly in an abbreviated and irreproducible manner.

I often read articles in peer-reviewed journals not because of the scientific story, but because I was looking for information on how to perform a specific method. Sometimes, I was only searching for the correct dilution of an antibody. When I finally found some information, I was always upset about how few details were given at all in the method parts of publications. In those days before the digital laboratory notebook, we often had to write protocols of the experiments we did at school, recording every single step and every single material in the protocol during my biological and chemical classes in high school, up to catalogue numbers and the exact room temperature. In practical courses at university it was also very important to record every detail of an experiment. I remember getting a point deduction for not stating the batch number of an enzyme used. Now the documentation of experiments can be simplified by using a digital laboratory notebook.

During my studies I was not a big friend of writing protocols at first, but came to appreciate it later, when I had my own research project. I tried to keep detailed records of my experiments, primarily for myself, to be able to refine my methods. Methods are complex clockworks of parameters and procedures. To change one cog in the machine can have a great effect – or none. Not keeping track of every parameter during trial-and-error experimenting was like willingly implementing uncertainty if my trial had an effect – or none. Therefore I acted bureaucratically correct in recording my experiments – and I recommend that to every scientist, especially when implementing a new method. Precise record keeping and protocol templates was also an important part when creating the digital laboratory notebook.

However, being a ‘bureaucratic’ in this regard, I often came to curse traditional publications. Has one ever been able to take the method part of an article, start cooking and being able to reproduce the method? I never did. I tried, but it never worked. Before a digital laboratory notebook, details were not given, descriptions were shortened and again, valuable information was lost. As a newbie in academic research, I was confused: Hadn’t I learned to record every detail as exactly as possible? Why, when I record in detail, should I not communicate the details? Why isn’t there a research tool like a digital laboratory notebook, where all the details are stored and shared amongst researchers?

The weathered researchers at my institute told me: ‘Boy, people do that on purpose. They don’t want others to reproduce their experiments so that they have a competitive advantage. And also, articles have to be short. The scientific story is what matters, not the technical details.’

I partly understood the argument. Researchers are humans, after all. However, I didn’t understand four crucial things that further fostered the idea of a digital laboratory notebook:

A digital laboratory notebook in support of science

In general, all this appeared more like negligence and complicated means of communication than logical scientific behavior. As a result, this negligence and lack of communication is not supporting research. In contrast, it opens doors to fraud. I think one could write an article and get it published with not a single experiment performed. Together with all the other difficulties I experienced as a researcher, the idea of inventing a digital laboratory notebook took shape.

This blog post continues at “Our Idea of labfolder – Part 3” – coming up soon!