No one can say that today’s young people are not active – four years ago, students from science faculty at the University of Tübingen said: Let’s participate in a competition.
But not just any small competition – it is THE international Genetically Engineered Machine competition 2015, short “iGEM”. Since then, the iGEM Team Tübingen has participated three times and won two bronze and one silver medal.

What exactly is iGEM?
The international Genetically Engineered Machine competition is an annual event in which students from all over the world participate. A team of students works on a project for a few months up to a year, developing and modifying biological model organisms to build various biological systems. These systems are then used for different applications such as biological filters, production of therapeutic compounds or sensor systems. The parts created for the modification of the organism are produced in a common standard and collected in a registry accessible to all iGEM participants as well as laboratories outside the competition. These Biobricks are interchangeable and reusable, due to the standardization of the parts.
At the end of the work, all participating teams present their project at the final conference (also called Giant Jamboree) in Boston, where the projects are evaluated and the best projects are awarded a prize.

The Team
The iGEM Team Tübingen consists of twenty-five voluntary students from biochemistry, biology and bioinformatics bachelor and master degrees. Starting with the development of a project idea, over organizing the funding and the actual lab work to the final project presentation in Boston, everything is organized by the students.
The team is supported by the university through professors from three departments which assist with their scientific expertise, and by providing a laboratory. 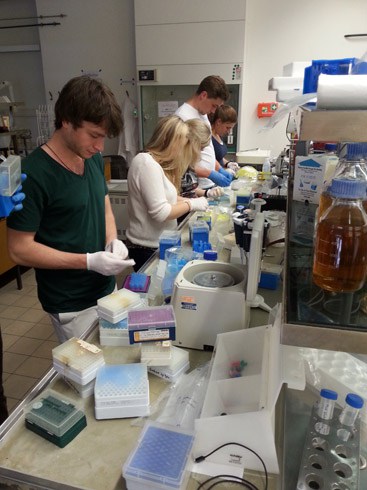 The iGEM Tübingen Team at work. Photo courtesy of the iGEM 2015 Team Tübingen

The Project
This year’s project is the development of a sensor memory module in yeast. Over the last years, many sensor modules have been developed in the iGEM competition. These allow the readout of the sensor at the time of exposure to the measured compound. Two years ago, the iGEM Team Tübingen developed a sensor system for progesterone, a steroid hormone which is involved in fertility and development, e.g. in fish. To allow a later readout, the team plans to develop a memory module for this sensor, which can ideally also be used for all available sensor modules in the iGEM registry.
The idea is to save the readout of a certain time point by a light signal, using the DNA recombinase Cre, and the photoactivatable Dronpa protein. Attached to both sides of the Cre protein, Dronpa forms a cage around the Cre recombinase, effectively inactivating it. Activation of the sensor results in expression of the inactive Dronpa-Cre-Dronpa fusion protein. Using light with a specific wavelength, the “cage” can be opened, activating Cre. Cre can permanently cut out parts of the DNA surrounded by specific recognition sites. Using this, it can be used to cut out a stop cassette in front of a reporter gene, thereby activating the reporter gene, for example luciferase. Expression of the reporter gene can then be detected using established methods. As the cage can be closed by light of a different wavelength, the rate of Cre activity in all observed cells offers a way for quantification of the saved sensor state, giving indication to the amount of progesterone present.